23-year-old Londoner Nilüfer Yanya has made waves with her eccentric, indie-rock-tinged soul and pop. Her debut album, Miss Universe, will drop on March 22 via ATO Records, and it’s filled with hard-hitting, glistening pop songs with a mature and one-of-a-kind artistic vision (the album is interwoven with spoken-word interludes from a fictional medical company “WE WORRY ABOUT YOUR HEALTH TM”). Paste featured her frantic new single, “In Your Head,” on our list of 15 Best Songs of January. Having previously opened for Interpol, Mitski and Broken Social Scene, Yanya is currently on tour with Sharon Van Etten in North America. 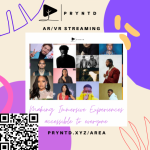